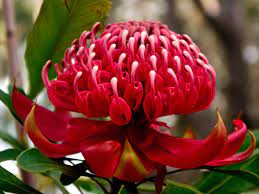 After the Black Summer bushfires in 2019-20, smoke was cleared from the area surrounding the Blue Mountains Botanic Garden Mount Tomah. An NSW Waratah, Telopea speciosissima, was among the victims. It had just become the first species to have its genome sequenced. This genome has been published in the journal Molecular Ecology Resources.

The genome sequence allows Waratah’s use as a model to understand how plant populations change and adapt to changing environments. This includes how the species recovers after a bushfire.

In a very short time, genome sequencing has made great strides. It took 13 years to compile 3 billion of the approximately 3 billion “letters” of our genetic code and cost US$1Billion to complete the first human genome. Today, it would take less than 1,000 hours to sequence a human genome. It takes only a few days.

Thanks to rapidly declining costs and advanced technology, the genomic era offers the chance to decode many plant genes and use them as reference materials. This will allow us to understand and preserve Australia’s fauna over the long term.

What exactly is a genome?

An organism’s genome is all the genetic information needed to grow, develop, and survive.

Sequencing a genome requires determining the order in which these bases are placed. We knew from our previous research that the waratah genome was quite large, with around a billion bases. It would also likely be divided into 11 large parcels known as chromosomes. Each plant would have two copies.

Cracking the code of Waratah

The first step in creating the waratah reference gene was to collect young leaves from a plant that grows naturally in the Blue Mountains. We extracted DNA from the leaves and used three different sequencing techniques to piece together the genetic code. This method generated many sequences that were hundreds to thousands of bases long. These sequences were then used to build the complete genome.

The genome assembly required a variety of software tools that could be used on powerful computers. The result was a sequence with slightly less than one billion bases. It was mostly composed of 11 large sequences. These sequences contain approximately 40,000 genes, roughly twice the number of human genes.

We sequenced the waratah

Prior sequencing efforts were focused on important crops and “model organisms”, such as Arabidopsis. Researchers extensively studied this plant and were the first to have its genome sequenced in 2000. There are many species in the tree of plant life.

The NSW waratah is among five species of waratahs in the genus Telopea. It grows in southeastern Australia and is one of approximately 1,700 species of the Proteaceae family. Other iconic Australian plants include banksias (grevilleas), macadamias and grevilleas. Despite this, only a few Proteaceae genomes have been sequenced.

The collaboration between UNSW Sydney and the Australian Institute of Botanical Science resulted from the waratah gene project. It was the first completed under the Genomics For Australian Plants (GAP). This initiative aims to generate genomes that will better conserve and understand Australia’s unique plant biodiversity.

We have hope for the future.

Black Summer was a symbol of the danger posed by climate change to our unique natural heritage. However, waratahs are fire-evolved and can regenerate themselves with the help of a modified stem, called a “lignotuber”, from which new shoots will emerge following a bushfire. It is a powerful symbol of hope for the future.

After being burned in the Black Summer fires, the waratah plant has regenerated and propagated at Blue Mountains Botanic Garden Mount Tomah. It will now be part of the garden’s living collection.

When the Australian Botanic Gardens Mount Annan opens next year, a display inspired by this plant will be featured in the foyer of the New National Herbarium of NSW.

The genome sequence of the Waratah will be used to help us understand its evolution and adapt to changing environments. This will allow us to preserve this species better and inform breeding efforts. We can sequence its DNA to reveal its evolutionary history and help ensure its survival well into the future.