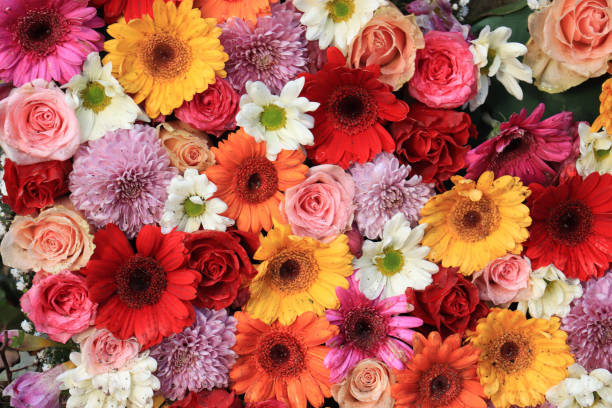 Angiosperms, which are flowering plants, produce flowers. 90% of all land plants are living and depend on them. Flowers are an evolutionary innovation that occurred in the geological timescale for plant diversification. Most likely, the most recent common ancestor of all living angiosperms lived between 140-250 million years ago 1,2,3. The most recent common ancestor for all extant seed plants, that is, angiosperms or gymnosperms, is thought to have lived between 310 and 350 million years ago, 4,5. A key question in evolutionary biology concerns the origin of the angiosperms and their most important defining structure, the flower4,6,7,8,9,10,11,12. There are three complementary approaches 7 to address this problem. The first is to examine the fossil record to find the closest extinct relatives 4,6. The second is to seek answers in the growing body of evolutionary developmental genetic (evo-devo) studies on the reproductive structures of living angiosperms and gymnosperms8,11,13,14. We use a large new data set and state of the art analytical methods to infer the structure and evolution of ancestral flowers. This is done by using the distributions of floral traits among extant angiosperms. This method provides estimates of how flowers looked at specific points in time and allows us to discover important clues about the origin and evolution of the flower.

The most recent common angiosperm, hereafter called the ancestral flower, was bisexual. It had an undifferentiated perianth with more than ten petals, an androecium with more than ten stamens and a gynoecium that contained more than five carpels. The perianth and androecium likely had three organs per whorl. These numbers, taken together, indicate at least four organ whorls (Fig. 1. See Supplementary Data 1 for more information and Supplementary Discussion to see estimates of uncertainty related to ancestral states. We also show that the perianth is radially symmetrical (actinomorphic), and the stamens have introrse anthers. The carpels are superior and most likely spirally arranged. All floral organs are free from one another. Despite some similarities to extant flowers, no living species have this exact combination. All extant flower species, even those from the earliest-diverging angiosperm lineages (e.g. Amborella or Nymphaeales), are derived from 24. The model-based solution to the controversial question of sex development in angiosperms shows that the ancestral flower was bisexual. This confirms that the functionally-unisexual flowers of Amborella were derived (Fig. 2 and Supplementary Discussion. We present the states with the highest mean posterior probabilities and the associated credibility intervals. These are derived from the reversible jump Bayesian analysis (C series of trees), which considers all forms of uncertainty (parameters tree times, branch times, model). The three asterisks (***) signify high confidence and consistency across reconstruction methods (e.g., actinomorphic, undifferentiated perianth). Other states should be considered cautiously. They were either associated with greater uncertainty (e.g., perianth phyllotaxis, number stamen whorls) or inconsistent across reconstruction methods (e.g., sex reconstructed to be equivocal and parsimony). Our analyses did not reveal the colours, shapes or relative sizes of organs. They were selected here for artistic purposes. It was impossible to reconstruct the exact number of organs. This representation was limited to a minimum number. However, reconstructions using more organs would be compatible with our results (for more details, please see Supplementary discussion, section “Reconstructing the ancestral flowers”). Supplementary Movie1 provides a rotating version of the model.

The fossil record can help us to determine the possibility of our reconstructed ancestral flowers and the best way for them to diversify. The oldest known fossil flowers are no more than 130 Ma 6,31.37.38. However, estimates of the most recent common angiosperm (our reconstructed ancestral plant) range between 140 to 250 Ma 1,2,3. As shown in our scenario (Fig. 4). Angiosperms from these Aptian-Albian Floras had many simple flowers 6,37.38.39. These were interpreted by both the present and past analyses 18,20 as being secondarily decreased. The record supports our reconstruction that the late Aptian and Albian flowers had whorled, often trimerous, phyllotaxis. Also, no fossils with the Pentapetalae typical Pentapetalae pattern (five sepals and five petals) are known before the Albian 40. Although there may have been a delay in fossil preservation for the earliest Angiosperm lineages of angiosperms, the sequence of floral traits found in the fossil record is consistent with our reconstruction of the initial stages of floral evolution.