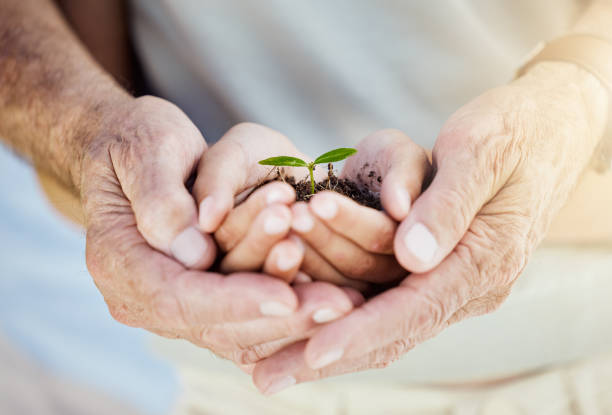 40 million-plus aging population faces daily challenges, including memory loss, depression, and social withdrawal. We constantly seek ways to alleviate our daily anxieties as a nation. Rutgers, The State University of New Jersey, conducted a six-month behavioral study on the effects of flowers on seniors. It found that flowers can reduce depression, encourage social networking, and help refresh our memories as we age.

“These results are significant because, as our nation becomes older and lives become more stressful, people look for easy, natural ways to improve their lives – and those of their aging parents,” stated Dr. Jeannette Haviland-Jones, who is a Rutgers psychologist and director of the Human Development Lab. “Now, there is a simple answer right in front of us .”

This research is a continuation of a 2000 study that found flowers can increase happiness and satisfaction in life for women. Rutgers began to study the impact flowers could have on seniors. Senior citizens experience different living conditions and more life changes.

Prevention in a Bud, Not a Bottle

Over 100 seniors took part in the Rutgers study. Some received flowers while others didn’t. These results shed light on the nature of seniors’ support systems and how they can cope with the challenges that aging brings. These are the results:

“Instinct tells me that flowers lift our spirits. But, their effects upon seniors are particularly profound, if they are not surprising,” stated Haviland Jones.

In particular, 81% of the seniors who participated in the study reported feeling less depressed after receiving flowers. Forty percent of seniors said they had increased social contact beyond family. Seventy-two percent scored very high in memory tests compared to seniors who didn’t receive flowers.

Haviland Jones stated that happier people live longer and healthier lives and are more open to change. “Our research has shown that even a small amount of nature, such as flowers, can make a huge difference in our well-being.”

Jeannette Haviland Jones, Ph.D., is a professor of psychology and Project Director at Rutgers’ Human Development Lab. The Flowers & Seniors study is Jeannette Haviland Jones’ second floral research project. Dr. Haviland Jones is an internationally recognized psychologist who is an expert on the role of emotion in human behavior, nonverbal emotional signals, and response. Haviland-Jones finished the first phase in 2000 of her research about the emotional effects of flowers on women. The Society of American Florists collaborated with the Rutgers research group, contributing its expertise in flowers to the project.

The Flowers & Seniors Study compared senior citizens’ feelings of depression, social contact, and memory to see if they depended more or less on flowers. Each participant received flowers at a different time and was assigned to one of four groups. Three interviews were conducted throughout the six-month study to measure changes in mood and behavior. Participants were also required to keep a daily log of their social contacts. A memory test was administered at the end of the study.

There were 104 participants in the study (94 women and 10 men), with a range of ethnicities spanning 55 to 93 years. Participants did not know the purpose and could not bias or skew the results.

Participants completed a baseline interview to collect data about their moods, health, and life satisfaction.

Second and third interviews were conducted to measure the changes in emotions and behavior.

The third interview was used to test seniors on their everyday memories. This included their memories of flowers and daily social contacts. Also, they were asked about recent social events. These data were also taken from their daily logs. The seniors’ answers were scored based on accuracy, specificity, and detail.

Randomly, participants were placed in four groups. Participants were randomly assigned to four groups. They were each given flowers at different times during the study. These were their thank-yous. The results were determined based on the frequency with which participants received flowers (if any) when they received them and any mood or behavior changes that occurred. These groups were:

The Early group: Only received a bouquet after the first interview (baseline). The flowers were delivered in time for the second interview.

The Late group only received flowers once – just before the last interview. The flowers were delivered in time for the third interview.

The All Flowers Group: I received flowers twice, before the second and third interviews.

The No Flowers group: They received flowers only after the study was complete. They did not receive flowers at any interview.

Researchers at Rutgers tested participants for changes to their memory, social contact, and depression. The researchers used the following methods to determine which flower group participants belonged:

One-on-1 interviews: Seniors were asked questions about their moods and behavior thrice throughout the study (see below for a list of questionnaires).

Memory tests: Seniors were tested using everyday memories. Participants were coded according to the detail they gave about the item or the event.